Matthew (middle) suffered a stroke as an 11 year old. The complications from it and other health problems have left him wheelchair bound. One of my runners told me his story and asked if we could help.

​We were able to raise enough funds to help the family visit him in a special school in Spokane a few times. Matthew is doing well and

progressing more than they ever thought he would!

I was approached by one of my runners, Kristen, whose friend adopted a girl in Senegal to pay for her schooling. Unfortunately it wasn't going well because she needed eye surgery. She wanted to know if I could help put on a race to raise money for it. I told her if she could wait until March, we could raise the money. We were able to raise enough money to pay for surgery for her, her twin sister, and enough left over to build a hut in her village so that the women no longer have to take a train to the hospital in the city if they have a difficult birth. There is now a Health Clinic in a small village in Senegal all due to Running to Give. I still get shivers just thinking about it. 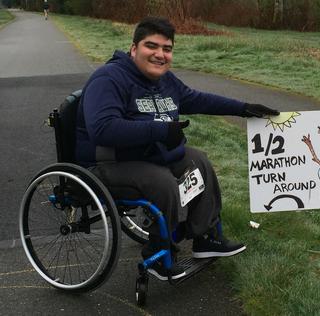 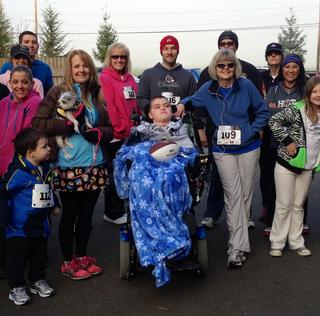 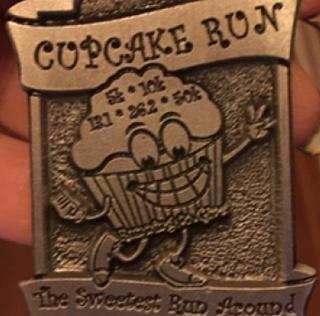 This outstanding young man is Mani, one of the most amazing people you'll ever meet. He was born with Spina Bifida and is paralyzed from the waist down. When he was challenged to complete a 5k at the 2014 Cupcake he did it, and when in September he was invited as a special guest of the Great Bacon Race to complete a half marathon, he did it. Unfortunately his wheelchair broke on that race! Since Tory ran with him, since the race was not an ADA race (and included 3 inches of gravel in some places), they had a lot of time to talk about his situation and some of the health issues he was having due to having to be in his chair that was falling apart all of the time.

She went back to the board, and in the next race we raised enough to buy him a racing wheelchair. Now he races all over the state and is healthier for it!